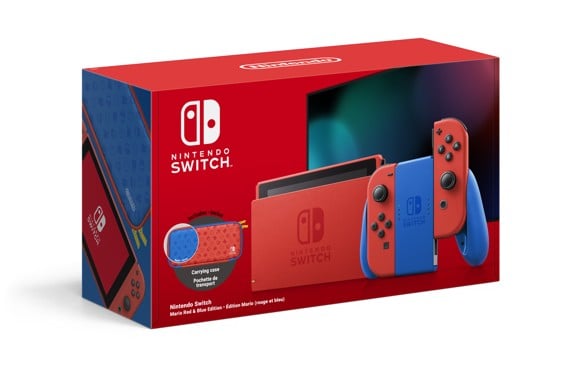 En del av dessa kampanjer:
It's time to Switch! You can play with Nintendo switch having it connected to your television, but it is also a system you can bring with you wherever you go! The Switch is a brand new style entertainment system. In October 2016 we got introduced to the …
Läs mer
Sälj in din produkt

It's time to Switch!

You can play with Nintendo switch having it connected to your television, but it is also a system you can bring with you wherever you go! The Switch is a brand new style entertainment system.

Nintendo DNA The original Nintendo Entertainment System brought two controllers with it, Game Boy made it possible to play on the go, Super NES added X and Y, and L and R button to enhance the fun. Nintendo 64 offered the World's first analogue control stick, and introduced a rumbling controller with the rumble pack. The Gamecube had a handle allowing it to be carried around. Nintendo DS added a touch screen, the Wii remote allowed for motion control, and the Wii U Game pad enabled us to play games off the TV.

Now, Nintendo Switch has inherited all of these magnificent features, which have been implemented with all the experience Nintendo has making gaming devices, each one giving us constant improvements.

No more region locking! Nintendo announced that the new console will not be region locked. Now you can enjoy games from all over the World without having to worry about compatibility.

A complete video game system for the home Connect it to the TV to play games. If you want to play away from the TV, simply remove the Switch from the Dock and you can use the Switch as a screen. Attach the left and right Joy-Con controllers and you can continue playing anywhere.

Now you have the freedom to change your play style!

You can play online multiplayer games, and you can also use your smart device application to connect to Nintendo Switch on compatible games. The online features can be tried for free after the launch. After the trial, in fall of 2017 the service will become a monthly paid service.

*The battery life will depend on the games you play. For instance, the battery will last approximately 5.5 hours for The Legend of Zelda: Breath of the Wild.